Berriman Eaton are very proud to have Sponsored the Scarecrow Tour Guides over the very successful weekend of the Scarecrow Festival 2015 held in Pattingham from the 25th to 27th September. A letter has been sent to all 133 Scarecrow creators and helpers of the event showing the amount raised from the three days, details are below:-

Hello to all Scarecrow Makers

We are thrilled to be able to tell you that following a weekend of fun and fine weather the proceeds of this year’s Festival is a staggering £12,758.00. This is a fantastic sum of money and we thank you for your contribution towards achieving such a great result.

The Steering Committee have decided to donate £5000.00 to our Pattingham School to be spent on new IT equipment for the children – something we know they are in need of. The remainder is going towards St.Chad’s Church to restore the stone cross over the porch – which will complete the Porch Project started with the first Scarecrow Festival in 2011 – with the balance going towards another Church project yet to be defined.

As you know we do not have a “competition” for our scarecrows, but as this year we were given two scarecrow figures we have mounted them on a plaque, trophy style, to be awarded each Festival. We put all entered scarecrow numbers into a basket and held a lucky draw – the winner was Maureen Thomas with her entry “Shaun the Sheep” – congratulations Maureen!

Chrissie – on behalf of the 2015 Festival Steering Committee.

(We unfortunately have no photo of Shaun the Sheep so have instead attached the Berriman Eaton Scarecrow – “We are streets ahead of the rest!”) 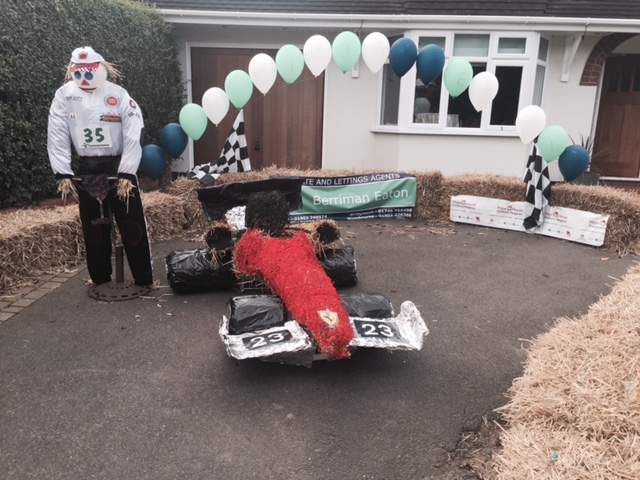