Knight Frank has analysed asking prices for properties across England and Wales to discover which region has seen the biggest increase since the housing market re-opened in May.
The data, which looks at the average asking price for two-bedroom flats and three-bedroom houses across the regions, shows that asking prices in Yorkshire and The Humber have risen by more than any other region since the market re-opened.

The study suggests some buyers are prepared to go further afield for better value as they strike a new work/life balance.

Based on the figures, provided by OnTheMarket, the average asking price for a two-bedroom flat in Yorkshire rose 10% to £153,354 in the week beginning 28 September from £139,404 in the week starting 18 May.

For three-bedroom houses, Yorkshire also experienced the biggest rise over the same period, increasing 8.4% to £186,045, as the below charts show.

Although the change in asking price does not necessarily show that underlying prices have moved, the fact Yorkshire tops the table for flats and houses is a trend worth noting.

“The market has been so buoyant due to a huge influx of demand from the south of the country,” said Emma Hodgson, head of sales at Knight Frank’s Harrogate office. “Whereas the South West of the country has a pull as a tourist destination, many buyers are coming to Yorkshire due to family connections.”

Half of all buyers Hodgson is currently dealing with are from the south of England compared to less than a third this time last year, she said.

Asking prices for two-bedroom flats in London dropped by 4% over the corresponding period, which was the weakest performance for the property types analysed.

While it suggests that buyers in the London are looking for more space, a rise in the asking price of three-bedroom houses in the capital demonstrates the story is more nuanced than one of buyers leaving the city.

“While many buyers have responded to a period of lockdown by looking for more outdoor space, others have brought forward plans to re-locate due to uncertainty over the size and scope of any second wave of Covid-19. It will be one of several drivers of activity in coming months,” said Tom Bill, head of UK residential research at Knight Frank. 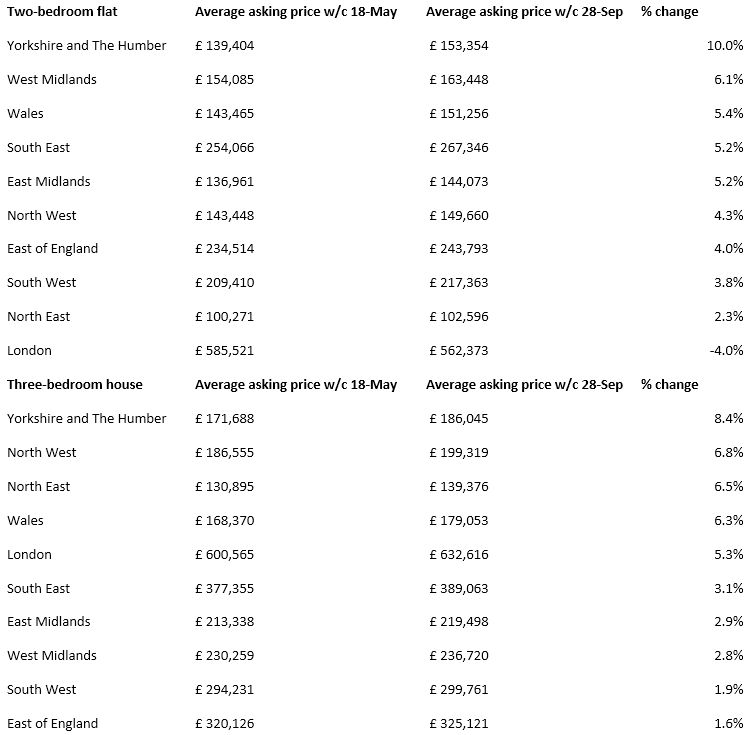