Well done to Bridgnorth Running Club who will donate £500 each to the Royal British Legion to commemorate 100 years since the end of WW1 and to Bridgnorth Hospital League of Friends to mark the 70th anniversary of the NHS.

The money was raised as part of this year’s Bridgnorth 10k which saw over 300 runners compete on a route around town.

This year specially-commissioned plaques which portrayed the town’s war memorial were presented to the winners, with every competitor receiving a similar medal.

A total of 332 runners finished the event. First home in a time of 34.54 was Matt Costello of Telford Athletic Club.

First female home was Kim Fawke of Lawley Running Club setting a new female record for the course, completing it in 37:26.

Bridgnorth Running Club caters for all abilities and meets on a Monday and Thursday under the Town Hall at 7pm. 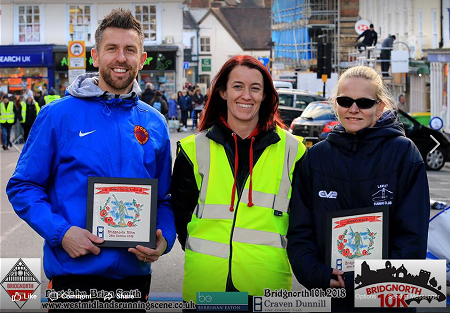