These three intrepid members of BE recently presented themselves at Darlington Street Methodist Chapel to assist in the soup kitchen run by The Little Brothers of the Good Shepherd who used to be in Thornley Street but now rent space from the Chapel.

We do various Community Service projects from time to time which not only assists the chosen charity but also opens our eyes to things we would not otherwise experience.

Sarah, David and Charlie were unsure about what to expect and were not enthused when Paul said that the first task was cleaning the toilets which were in a disgusting state and needed thorough cleaning and removal of vomit and everything else associated with dirty toilets. We meekly followed him like lambs to the slaughter and with looks of unconcealed horror on our faces. Halfway there he turned round with a big smile and said ‘ you fell for that’ which we certainly did!

Laying up tables followed with some sorting of a profusion of tinned goods, Sarah acting as a waitress and Charlie and David perfor¬¬ming the difficult task of making tea and coffee!

This is a major enterprise serving hot meals every lunch time and providing carrier bags of provisions on Mondays, Wednesdays and Fridays. The food is provided by almost all the local supermarkets and food businesses who give damaged or other items they could not sell. The throughput is astonishing and they not only provide food but advice on benefits problems and try to equip people to get back into work.

On our day the menu was soup, fried chicken, stew and bread and butter pudding. There were about 100 takers and we were told that was a quiet day. The overriding impression was of a very slick operation and grateful and polite recipients. 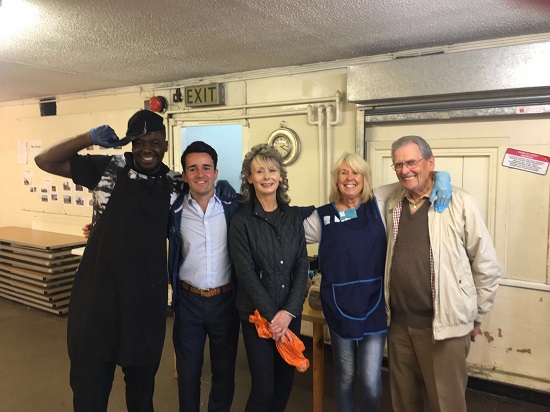