Councils are using special legal powers to ban the use of the signs in some of the country’s most popular areas.  Homeowners in some of Britain’s most desirable areas will no longer have to suffer “forests” of estate agent boards “disfiguring” their streets as councils use special legal powers to ban the signs.Councils across Britain are increasingly using emergency powers to crack down on estate agents’ use of the hoardings in popular areas as the housing market continues to boom.

Some streets are so popular with house-hunters that estate agents battle each other to put up as many advertising hoardings as possible, while other areas crackdowns are focused on neighbourhoods popular with students where To Let signs are left on flats and houses all year round. 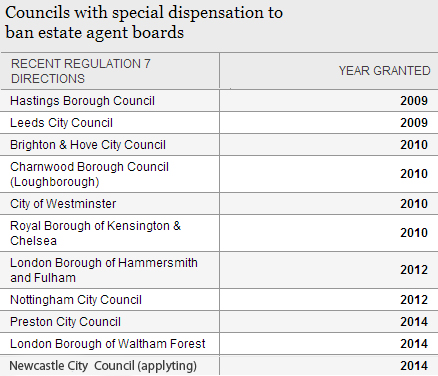 Ten councils have been granted a special dispensation by ministers to ban all boards from “sensitive locations” where proliferation of the advertisements are causing problems for residents.

Councils have been able to request special dispensation to ban boards since 2007 but the rising housing market has seen the number of local authorities requesting the powers rise sharply in the last two years.

In areas where the bans apply, no estate agent board may be erected without the express permission of the council.

The increased use of the powers come as research shows that the housing boom is spreading across the country with rapidly rising prices and queues of buyers no longer restricted to London.

Property sales in the first three months of 2014 reached a six-year high according to the Royal Institution of Chartered Surveyors.

Preston and Waltham Forest have been granted the new powers already this year and Newcastle Council has submitted an application and are awaiting the outcome.

Many councils have already used the powers to fine estate agents for breaking the rules. A Brighton estate agent was fined £1,000 for erecting a ‘For sale’ board erected in a central conservation in Brighton.

Another in Hammersmith and Fulham was fined £5,195 for two hanging boards in a restricted area.  Brandon Lewis, the local government minister, said: “A sensible balance needs to be struck between letting people advertise their home for sale and allowing forests of boards which disfigure the street scene.

“Councils have powers to tackle the proliferation of such boards where it is an acute local problem.”

Hammersmith and City councillor Greg Smith said that the signs are “intrusive” and “not necessary in the digital age” where house hunters search for available properties on the internet to by contacting estate agents when they see signs erected on the street.
He said: “The public have backed our board ban and we will not hesitate to enforce it.”
To be granted the power to ban boards, councils must convince the Department for Communities and Local Government that the signs are causing problems. Powers have been granted to areas which have proved that the signs are causing serious damage to the look of streets or increased risk of burglary.

Research by South Wales Police found that properties displaying a To Let sign were significantly more likely to report a break in.

Applications are not always successful. In 2008 Canterbury City Council’s application for Herne Bay was turned down because the look of the area was not seen to be significantly damaged by the number of estate agents signs. The council is considering reapplying for the powers.

Newcastle Council, which is currently awaiting application for a banned area includes nearly a fifth of the city, mostly containing student rental properties.
Southampton and Reading councils are considering applying for the power to ban To Let signs in areas with a high number of students.

Duncan McCallum, the head of government advice at English Heritage, said: “In our most historic streets estate agent boards can be visually intrusive, especially when there are many of them in a small area.

“While we don’t have a formal role in determining such advertising we believe that minimising street clutter helps keep places attractive and pleasant to use.

“We would support local authorities and communities where they feel that limiting estate agent boards in specific historic areas delivers environmental benefits that outweigh any short-term economic gains.”

The ban in Kensington and Chelsea has the support of some estate agents as it has ended “board wars” in the area where streets were covered with a plethora of signs and agents were “hacking down” the hoardings put up by rivals.