A three-storey Shropshire building which has history stemming back to medieval times and still retains many original features is on the market for £275,000. 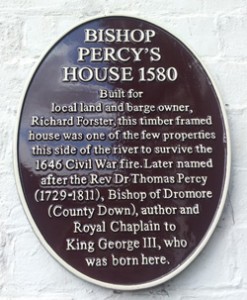 Bishop Percy’s House in Cartway, Bridgnorth, was one of the few properties to survive the town’s great fire in April 1646 and was the birthplace of Bishop of Dromore Thomas Percy, author and Royal Chaplain to King George III.

It is believed the building, built in 1580 by wealthy shipping merchant Richard Forster, was possibly created around a defensive tower. It was built as a home and commercial premises due to its location near the River Severn.

Being home to Bridgnorth Boys Club from the 1940s to 2003 it is now on the market with estate agents Berriman Eaton.

Partner Caroline Eaton said: “We deal with a lot of interesting and historic properties but Bishop Percy’s House is one of the oldest in Bridgnorth and was built from oak posts and beams believed to have been salvaged from old ships.

“It is on the lower end of Cartway, an area of Bridgnorth known in medieval times as Cowgate. It remains full of history with the original external walls in wonderful condition and even the original front door is still in use.

“I have met with English Heritage who describe it as a ‘show-stopper’ of a house and it would be wonderful to see it brought back to its former glory. It is such a large property that it could be used in so many different ways.

“It would be wonderful to see the ground floor as a museum or tourism focal point so that people can see the wonderful woodwork and historic fireplace and the second and third floor could be residential. But it would also make a lovely family home, a public house, a business premises and much more.

“The building was previously valued at £1million with planning permission and the sale includes an attached cottage that can be sold separately.”

The building has been owned by various people and organisations since its creation. In 1672 it was documented in the Hearth Tax Assessment that the property had seven fireplaces and was occupied by Anthony Nott, who had succeeded Richard Forster as its owner.

By the 18th century the properties recorded residents were Thomas Nott in 1712 and Mrs Nott in 1725. Then in 1727 the house became the property of Arthur Lowe Percy, a wholesale grocer and tobacconist from Worcester when he married Jane Nott. Percy went on to become the bridesman of Bridgnorth in 1733, an alderman in 1737 and served as a town bailiff in 1742 and 1751, he passed away in 1764. Arthur Percy was best known as the father of Thomas Percy, who was born in 1729 and went on to become the Bishop of Dromore. It was from here on the house became known as Bishop Percy’s House.

By the middle of the 1800’s there was a brass and iron foundry at the rear of the property run by Charles Rushton and later by the Barker family.

In 1865 the house featured in a sale catalogue of the estate of Lord Sudeley, described as an Ancient Tenement known as the Old House, a fine specimen of Domestic Architecture of the 16th century, famed as the birthplace of Bishop Percy. It contained three rooms, a brewhouse, a warehouse and underground cellarage, and was occupied by Mrs H Barker.

In 1909 the house was brought by W H Foster of Apley Estates and records showed in the 1920’s the former foundry building was used by the Bridgnorth Boy Scouts. In the years prior to World War II it was used as a soup kitchen.

In 2003 the Boys Club was was put up for sale and bought by a local developer but planning permission to convert it into new homes has now lapsed.